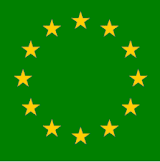 A pleasant Summer's eve, gentlemen. Some football match we've to discuss in what will be our final daily of the Summer. One could scarcely have hoped for a better send-off. After 55 (!!) long years, England have finally made it back to the final of a major international. Don't allow the egregiously soft penalty to fool you either. They earned it on this day. 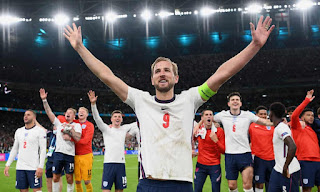 Sensational match from Sterling and Maguire. Walker and Henderson were excellent too. The day doesn't belong to any of the actors on the pitch, however. The real star of the show was the world's most closely watched and nitpicked football manager. 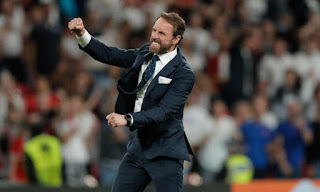 No more carping and quibbling, Limey -Ms. This is the man who got you here. All of you should be grateful that big Sam went popping his mouth off to those undercover reporters. Few would have predicted that a hastily installed caretaker who had never even coached a team before reach such heights.
He's your hero. What an amazing tournament from the gaffer.

Your friendly bookie is certainly no Michael Cox, even if he averages about as many words on a daily basis. Moreover, the blog isn't meant to feature deep-scout tactical write ups. Hard to believe, I know. These are the short versions; breezy and light for the Summer season. If you still don't believe me, I'll gladly point you in the direction of some twelve page Bundesliga single-match narratives.

Without going into that sort of depth, we will supply some extra illustrations tonight. I genuinely wish to show you how brilliant Southgate was in managing his shape and personnel. The Internet surely brims with thousands of other praise pieces this evening. The bookie wishes to add his own modest one as this syndicate chapter draws to a close.

Here's how I thought it would look. 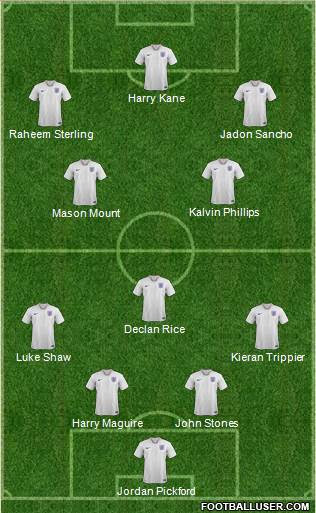 Turns out I, like many others, were wrong before we were right. The English trainer retained the 4-2-3-1 from his quarterfinal victory, raising a few eyebrows be reinserting Saka over Sancho despite the fact that the former had dipped hard and gotten injured in his previous start. 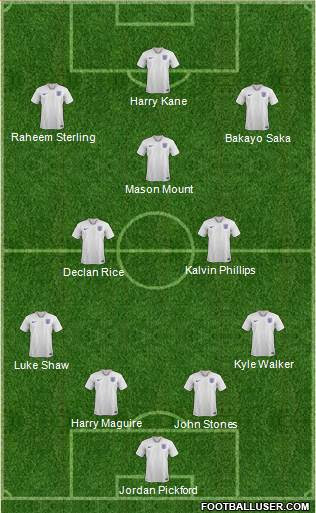 Following a furious start for the hosts at Wembley, the two counties effectively cancelled one another out through much of the opening 45. A 1-1 halftime score seemed fair. Both teams kept the football at a high and eminently watchable level.

Neither tally had much of anything to do with tactics. Damsgaard's set-piece gem, aided by a late Pickford reaction, gave the Danes a deserved goal while Kjaer got the hard-luck own-goal credit after some brilliance from Kane, Saka, and Sterling.

More evenly-matched entertaining football from both sides after the break, with Kasper Schmeichel dampening whatever slight edge the There Lions maintained in terms of chances. Extra time seemed fully logical.

Only one substitution from Southgate in normal time. Grealish replaced Saka in the 69th. The Villa man everyone on the Isle is so enamored with took up the left wing attacking position while Sterling moved right.

For some reason we had six minutes of added time at the end of the full 90. Not entirely sure how match official Danny Makkelie's worked that out. In any event, Southgate let it run. He wouldn't employ any additional changes until five minutes into the first added period.

That's when things got interesting....in an apt enough minute. 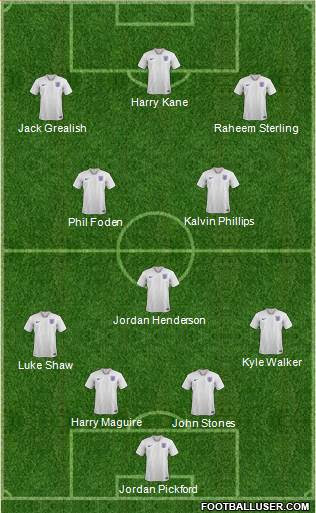 There's the 5-2-3 we had all expected to see. A smart move to plug a fresh Jordan Henderson in at sweeper and slant Phil Foden unexpectedly left. As the team maneuvered into this shape just prior to the substitutions, everybody started getting a pop in.

For the time interval between the 93rd and 104th, Schmeichel was under more or less constant bombardment. The Danish keeper spared his team's blushes on several occasions. A English goal was most assuredly in the air.

Yes, yes. That had nothing to do with this. 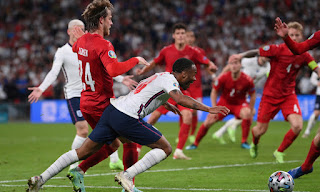 A bad call. Plain and simple. Sterling went to ground far too easily and embellished far too obviously. This wasn't merely a soft penalty. Virtually no one agrees it should have been awarded. Okay, okay. England were still racking up plenty of chances and the Danes were completely flat.

Arguments that the Danes may feel hard done by after Schmeichel saved a poor Kane spot kick and the rebound propitiously fell back to the England striker fall apart in view of that fact as well. That's why we football lovers respect the xG stats. They tell us everything about the better team. 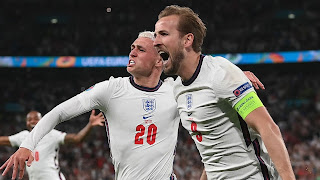 Literally nothing more from the Danes after that. No energy or inventiveness from the Red-Hvide so many of us wanted to see win. To call Braitwaite's effort in the 115th a legitimate chance is being very generous indeed.

One more thing I'd like to show you. Southgate subbed off his sub Grealish--something considered a serious affront to a player in German football culture--and closed it out with this. 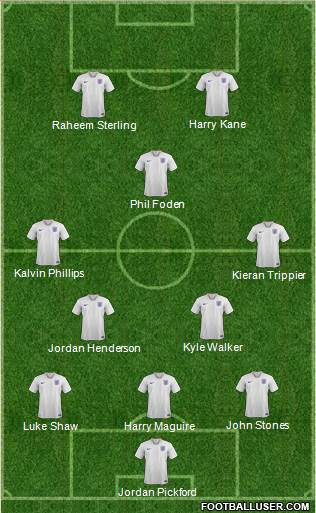 That's how you close out a match. Switch to three at the back, flatten out, add a second sweeper, and keep a fresh player on one of the wings and one central for closing counters. It's brilliant. The tired legs are protected.

It nearly led to a second goal, with the Danes at least remaining steely enough to prevent it with their last reserves to prevent it. Great stuff from both sides in that regard. A magnificent finish to our last analytical daily of the Summer festival.

At this point you're friendly bookie can (and does) recite the Danish tactical set-up in his sleep. The thing of it was that Hjulmand's tactics were no secret. Southgate timed his formational shifts based on the re-formats we all knew where coming. 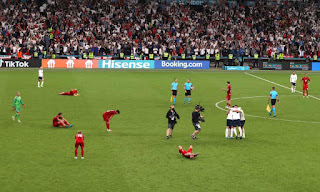 It didn't take long after the final whistle for the DBU actors to collapse on the pitch. Less than a second and they were on the deck. Pure exhaustion down the stretch. Nothing left in the tank after a grueling competition of 3-4-3/4-4-2. 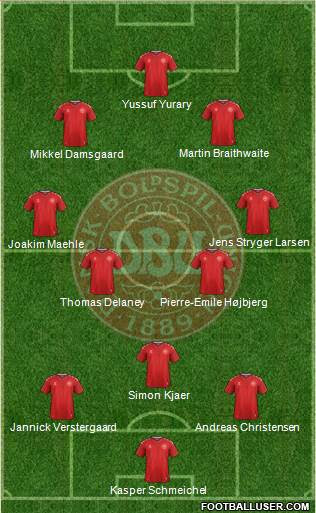 Everyone essentially knew what was coming, even if we found ourselves in disagreement over whether Yussuf Poulsen (Yurary) or Daniel Wass might find their way into the XI. Hjulmand faced a choice as to whether he might want to alter the shape somewhat.

I would argue that he engaged in some mistaken tinkering. 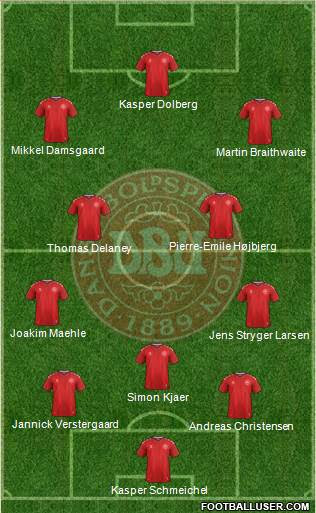 It was definitely wider that what one expected. Furthermore, the "flying wingbacks" worked a considerably deeper axis. To my eyes it wasn't necessarily conclusive that Thomas Delaney and Pierre-Emile Højbjerg were working a split-stagger, so I leave them axially paired in my illustration.

In any event, it never really got going. One could label something like this far too conservative. Admittedly, Hjmulmand probably faced an unavoidable intimidation factor facing England at home at Wembley. That didn't mean he needed to succumb.

All of us tactics-heads kept a close eye on the overhead cam to see when the 4-4-2 would materialize. Right on cue, it came with the triple substitution in the 67th. Southgate anticipated it well. His players were clearly instructed to spread it out/tire it out in possession. They executed this perfectly.

It failed for other reasons besides this. Hjulmand waited another twelve minutes to get his next sub on, then didn't get the final personnel switch off until almost the end of normal time. As a result, a completely gassed Thomas Delaney had to function as the ten until Mathias Jensen finally relieved him. 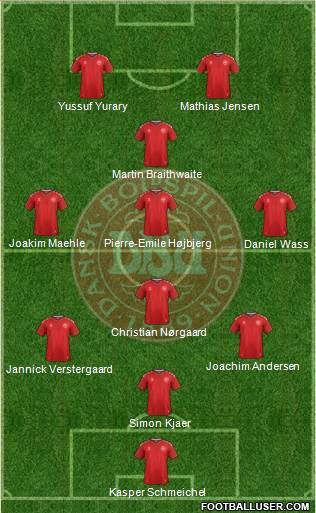 It couldn't function with Delaney in the place where Braithwaite was ultimately supposed to be. If Hjulmand was intent on triggering the 4-4-2 reformat, he needed to get all the right players on far sooner than this. Too much time was lost.

Additionally, this particular version of the 4-4-2---understandably enough--couldn't keep the same kind of menacing shape as the ones studied from previous encounters. Maehle, Højbjerg, Braithwaite, and Kjaer have all logged maximum minutes in this competition. Nothing left. 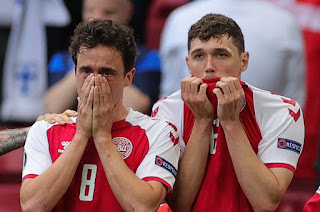 Boy do these guys ever need a vacation. What a harrowing and enervating month it's been. Pity it doesn't work that way in the footballing world. It's straight back to club training camp for everyone. I hope Thomas Delaney at least gets next week off.

“Riffs of the Day”—Day Twenty

Vicey: 53-M.....Damsagaard's emergence this Summer has forced every man to reckon with what (for most of us) is coming. 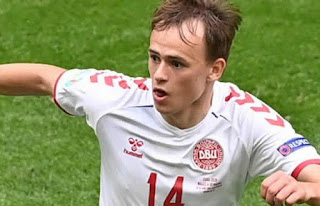 For some of us, it comes at the tender age of 21. Others carry a false sense of security into their 30s or even 40s. Just when we feel as if we've lived long enough to evade the curse, we fling up our arms in celebration and..... 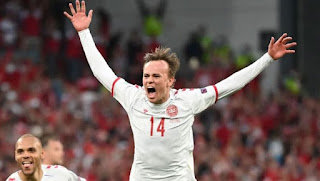 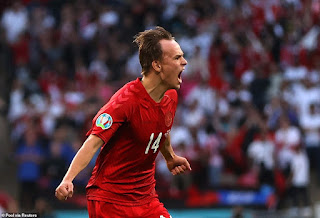 It's coming for (almost) all of us.

Unless you happen to be Arlo Guthrie, that hairline is coming for you.

Reader: Why must we endure this Grealish nonsense every fucking match?

According to the internet, he's basically the male version of Kiera Knightly. 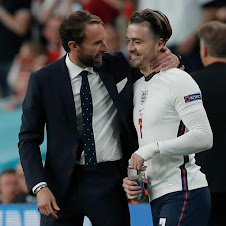 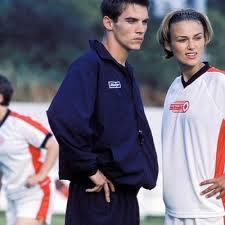 Reader: Is that an English man-pile?

Vicey: Something I'm not used to beholding either, 11-M. 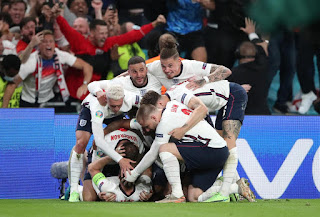 They just out-man-piled the Italians! Wouldn't bet against them in there final!

Reader: Since there aren't any more lines, can we get some hot English girls for the farewell close?

Vicey: Absolutely not, 23-M. I already helped you out on that front back on Day Three. I already have a better idea of how to close this one out.

Reader: Feeling a bit letdown by this. I'm not used to knowing what winning feels like.

Vicey: An amalgam text from a few English -Ms who actually have no clue what it feels like to make the Finals of a major international.

Since your friendly bookie has seen lived to see his own country make six Finals, take the European crown, and win two World Championships, I think we need to end on the following note: 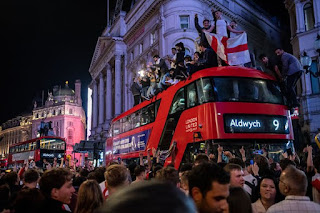 This is what it feels like! Take her out for a spin, England! Football parades and caravans don't exist on the Isle in the same way as they do on the continent....at least not until today.

The bloody English don't even know what to do with themselves now. They've stopped signing "Football's Coming Home" and picked up "Sweet Caroline". It's mass hysteria.

The high-percentage vaccinated population of the Isle takes a break from these historic celebrations to bid you a spirited farewell until the final goodbyes.