It always is when we reach this stage of this particular international.

The "mother continent" always delivers. If you choose to shutter your eyes to this tournament, that is your personal loss.

This world offers misery, dejection, fear, and constant outrage to those who seek it out.

It also offers the color, light, passion, and power of football. The choice is yours.

A shootout that went 18 spot kicks deep anyone? 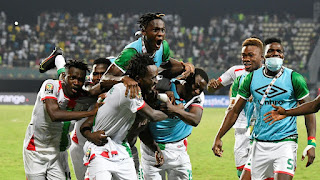 How about the ultimate Cinderella Story? 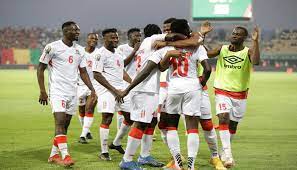 The sting of the Scorpions!

At least the bookie got something right! Totally misfired on the "Super Eagles".

At least we still have the tournament hosts. 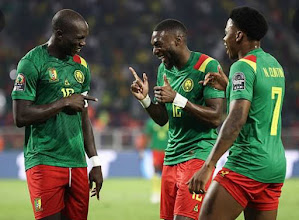 So it goes with footballers. Cherish every moment!

We're all a bit concerned for Alsio Cissé's Lions at this point. Only one goal scored in group stage play. Two 0-0 draws were still enough to top the group, but from whence shall this awakening come? 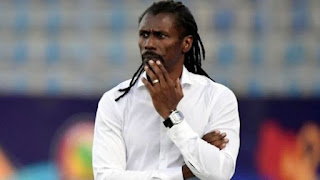 It's far from clear. African football's "Philosopher King" has done his fair share of thinking. Sadio Mané worked as a lead striker in the first match, an anchoring ten in the second, and a left flanker in the third.

Still the answers don't come.
The elimination rounds offer all a clean slate, but nothing has even had a chance to take hold and incubate yet. It's late. Perhaps too late to pull something together to stop a Verdean veteran team largely accustomed to one another.
Call the bookie's tactical instincts into action, will you? Fine. Divot Ismaila Sarr as a false-nine. Keep Mané on the left and give Bamba Dieng the go opposite.
It is accomplished.
Prop Bets (as always, feel free to offer your own)

There may yet be room still in this quarterfinal set for one more cinderella.  The "Flames" were among those who met their "upset special" status. Team spirit remains in line with hair-dye coordination. 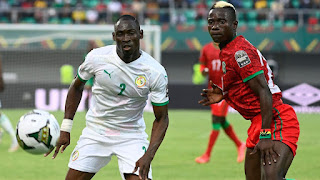 Regrettably, hair-dye coordination seems to be the only type of group chemistry holding at this point. One could tell during the Senegal match that Malawi were bucking and breaking at times.

There's also the fact that they're up against this man when he happens to be coming into form. 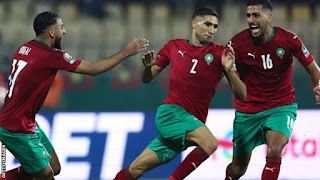 Yeah. Achraf Hakimi in the mood. The heart called for another "upset alert", but sadly we must refrain from pushing the button here.

Looking forward to a fast, fun, and even close one here. In the final analysis, the favorites likely prevail. 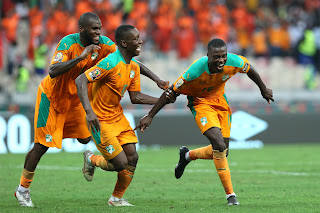 Too much pop in this year's version of Les Elephants. Once a Carlos Queiroz Apostle, the bookie can't comprehend what he's seeing from the Portuguese trainer currently in charge of the Pharaohs at this point.

It's all set up for the 2015 Champions to supply us with more special moments still. Apologies to the record continental champions, but the revival with have to wait another year.

Could be a real high-scoring cracker, though.

Feeling pretty good about "Les Aigles" prospects here, even if they are playing a two-win team. The National Thunder were fairly bang average in both of their victories. The 2015 hosts are not to be underestimated of course, but neither are the "salute crew". 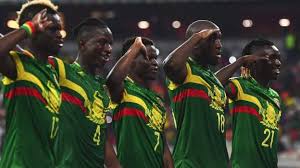 Good God does your friendly bookie love this country and this team. It doesn't matter how many Traorés, Konés, Camaras, and Coulibalys they confuse us with every year.

Keep them coming. I don't care if they drive me crosseyed every year. Look, it's a sentimental pick. I can have one of those.

By the way, since we haven't mentioned it since the preview section.:

This country has earned its right to football!

Everyone set for just the second ever round-of-sixteen in the history of the mother continent's grand showpiece?

That's right! Who will be this year's Benin, South Africa, or Madagascar?

I know some of you aren't the biggest fans of the 24-team-format, but there's no denying that it never fails to supply us with some unforgettable moments.

We've seen no shortage of those already, to the slight detriment of the bookie's stats:

Meh. No sports prognosticator actually wishes to be right all of the time...though your friendly bookie sincerely wishes he had been right about the Leone Stars.

Damn. Not happy to bidding farewell to this team. 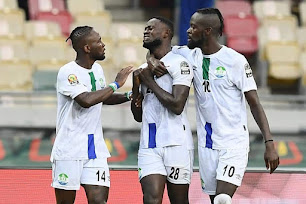 Please don't take another 26 years to return to us, brothers!

On the topic of farewells.... 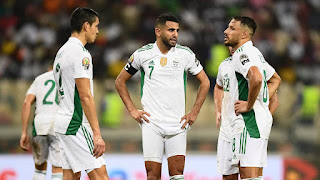 As predicted, down go the defending champs!

Nothing quite like that special feeling one gets when the title-holders bow out early. It's so enthralling to know as early as the group stages that we'll definitely be crowning a new champion! 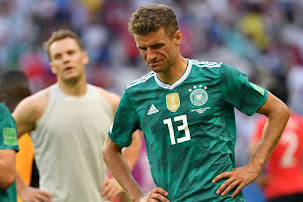 Er.....okay. Maybe it's not always such a nice feeling.

In honor of our fallen Algerian comrades, we'll invite 2018 Thomas Müller in a Fennec-themed tricot that the bookie never, ever, EVER WANTS TO SEE AGAIN to help present these Lines.

Note that catching up on the scouting continues to present a challenge for a football writer with so many preexisting commitments. Hence, we'll deliver the second half of the first elimination round on Monday.

The Gabonese Panthers seek too punch through to the quarters for the first time in a decade. Standing in their way are the resurgent Stallions. These two nations remain quite familiar with one another. They met in the group stages of this tourney both in 2015 and 2017.
Few will recall the 1-1 draw from the 2017 edition. Most everyone, however, can surely conjure up the memories of Pierre-Emerick Aubameyang's back flip from the 2-0 Gabon victory seven years ago. 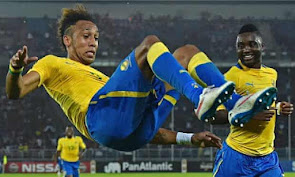 For those interested, the recently removed Arsenal captain has not played a single minute for his country yet in this competition. We seem to behold a prime example of Bill Simmons' famous "Ewing Theory". Teams pull together without their star player and end up playing better.
You know full well that your friendly bookie is partial to the Burkinabés. There's nevertheless no denying that Gabon are the team with a more coherent identity. The Upper Voltans are plagued by basic problems like holding onto the ball or setting up attack builds whilst the Gabonese have players gelling in a system.
It brings the bookie no pleasure to hit the "Upset Alert" button so early; especially not when it translates to the elimination of one of his favorite African footballing programs. Alas, it must be done. Very much hoping to be proven wrong here.
UPSET ALERT!
Prop Bets (as always, feel free to offer your own)

A quite unfortunate draw for the "Eagles of Carthage" here. The bookie's selected favorites for the tournament must square off against the hottest team in the competition.

Such a matchup leaves one with a slightly sour taste in the mouth. The Tunisians wouldn't be faced with this nearly impossible task where it not for the abysmal refereeing in their opening group stage match. 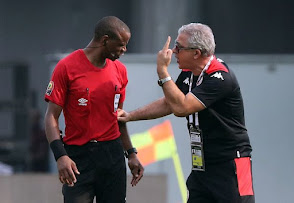 Sigh. Not at all the story us Africa lovers wanted this glorious footballing festival to be defined by. The fact that this piece of news may be the only AFCON info that football fans across the globe are acquainted with genuinely sucks. News of mistakes really do travel faster than the speed-of-light.

Well. Those obsessed with a "fairness narrative" in one of the most inherently unfair of all sports can argue that the Tunisians should have overcome Gambia (even reduced to ten-men) in order to avoid this matchup. No need to feel bad about what should be another big victory for the "Super Eagles". 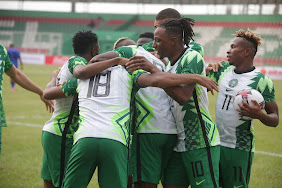 Onwards, lads! All the way back to the finals!

After the 2019 tournament (the first to feature a 24-team field) actually gave us three cinderella underdogs who made it to the quarterfinals, we must assess the likelihood of something similar happening here. An upset tip here is so easy; almost too damned easy. 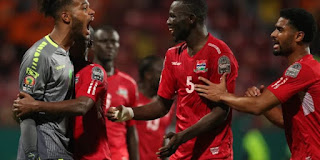 What to make of these Scorpions, brothers? They've defied every last expectation. Losing the captain and the first choice keeper only appears to have strengthened their resolve. It's a storybook. It's a fairy tale.
How much longer can this really go on? 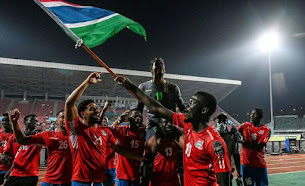 Bookie thinks they can pull it off provided they don't succumb to overconfidence.
It can be done. The National Elephants are ripe for the taking.  Syli gaffer Kaba Diawara has tried all manner of ways to get his tactics straight. Too many experiments. Too much of an unsettled role for Naby Keita. A scalp sits waiting to be claimed.
Up With the Scorpions! 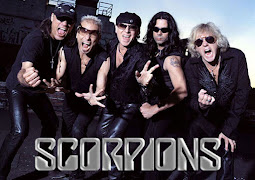 Dammit. I thought we already made this clear. Not THOSE Scorpions.

We'll pull back on the upset special here. The closer one looks at the 3-2 victory over Ghana from the Indian Ocean crew, the more one comes to the conclusion that it was more a case of the Black Stars just being that damned bad. Note that they were playing against ten-men for 75 minutes as well.

The Coelacanths have some interesting players, but they are absolutely not this year's Barea. 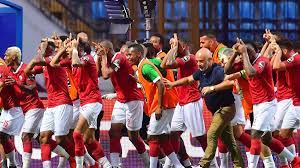 ....and they don't have a cool team celebration either! Seriously. We can't get some "fish necks" or something? Perhaps a little "swim motion"? Maybe a "snorkel nose hold"? Something. Anything!

The hosts, who remain the best team in the tournament, have always prepared a little something for their fans! 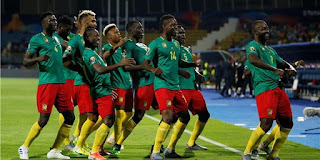 This one could get ugly.