Welcome to the 3,457th edition of "did the bookie effing well tell you or what?"
You know the drill -Ms. Fork over the cash along with your apologies. We've got ourselves a rollicking tournament now down on the "mother continent", brothers.
Your friendly, non exploitative bookmaker proudly displays his stats.

When the bookie has a chance to scout, he truly knows what's what. Speaking of that, the hectic footballing schedule leaves me a bit behind on my scouting. Hence, we'll do that thing in which we break up the third round into two posts.

This next set of lines will take you through the conclusion of the first three groups over the next few days. Joining us as guests to help present the lines, it's none other than the two gentlemen from the host country who got this competition jump started. 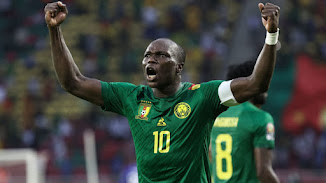 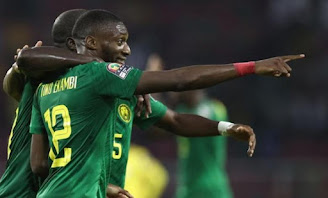 Karl Toko Ekambi with the "nah, it's all you" footballer point. 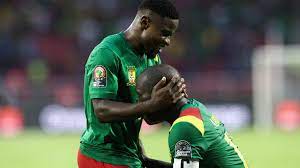 The latter christening the former.
Football is the greatest godamned thing in the world.
Monday, January 17th
Group A Final Kickoff @ 17:00 (UTC +1)

The undefeated hosts still have quite a bit to play for here. First place in the group remains on the line. The runners-up from Group A face what will surely be a tough test in the runners-up from Group C in the first round of the knockouts. That could be Gabon, Ghana, or possibly even Morocco.
In order to ensure a soft knockout round opponent, Les Indomitables will play for the win. Their fans deserve nothing less anyway. Cape Verde need at least a draw to retain hopes of advancing. Ethiopian supporters will show up hoping for a miracle lopsided win against Burkina Faso.
Spare a care for the East African boosters who made the cross continental trip. 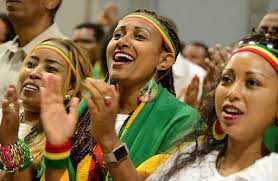 You know full well from keeping up with the news that not Ethiopians have far too little to be enthusiastic about these days.
Cameroon vs. Cape Verde

This year's version of the sharks aren't an incapable bunch by any stretch of the imagination. They surprisingly held their own for long stretches against a far superior Burkinabé side on Thursday. Toni Conceiçao nevertheless has the backing of the stands and greater depth to draw upon.
Bookie is betting this Lion gets his chance to score in this one. 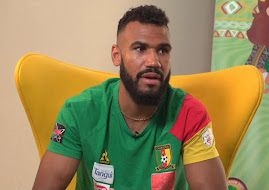 There may be realistically no hope of advancement for the Ibexs, but there's no denying the fact that this year's Stallions simply don't have their coordination together just yet.
Having correctly picked no fewer than three draws this tourney, bookie's going to go ahead and bet on his beloved Upper Voltans to do just enough here.
Perhaps we can see this 4-2-3-1 begin to pick up some momentum in the knockouts.
THE LINE: Pick em'
Initial Group Projection (1/5/2022)

Mega-intrigue here as the bookie's tapped favorites to clip into the glass slippers went ahead and confirmed their cinderella status (and last round's main upset alert) with a 2-1 victory over Zimbabwe. Gentlemen, I present to you the "Flames" of Malawi! 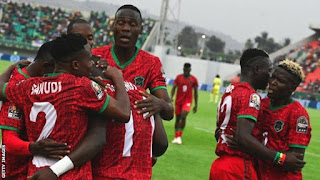 They are real and they are red hot. All the mountaineers need against the highest ranked African football team on the planet is a draw to secure almost certain passage to the knockouts. It's a tall order, but a team playing this well together can do it.
A brief explanation of the sensation comes below.
Senegal vs. Malawi

Aliou Cissé's Terangans have their issues. They've looked totally anemic on the approach from the left and are having serious quality issues on the right. COVID clearances means Africa's current "cult trainer" will get some actors back. Not in time predicts the bookie.
Thanks to Gabadinho Mhango (perhaps familiarize yourself with the name, the Flames were able to overcome the loss of their captain early to injury in the 2-1 win over the warriors. The underdogs know they can perform through excuses.
The West Africans don't know that yet. It'll be a draw.
UPSET ALERT!
THE LINE: Pick em'
Zimbabwe vs. Guinea

After a far superior first half against Senegal (at the end of which they probably should have been awarded a penalty) the Syli Nationale frayed a bit against the Terangans in the second 45. Hard to see how that matters much here.
The warriors may be the worst team in the tournament. That comes as something of a surprise as the bookie surely thought them better than the likes of Sudan, Mauritania, and our Coelacanth friends.
Kaba Diawara has what it takes to obtain victory here with a fantastic chance to top the group.
THE LINE: Guinea +1 Goal
Initial Group Projection (1/5/2022)

Things haven't quite shaken out here as expected. There's still time to rectify that. Some have given up on the Ghanian Black Stars already after they themselves gave up and sat deep after going up 1-0 against Gabon. Milovan Rajevac really fumbled it away with those wuss tactics. 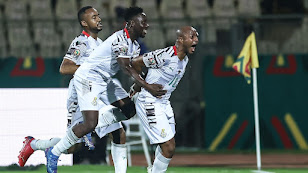 Nice positive picture from the Ayew brothers Era. Will it (in addition to being overshadowed by the post-match melee) be the last? Some things definitely need to go right for the Gold Coast Playaz.
A win of two-plus goals over this year's non-Cinderella Indian Ocean representatives is achievable. Then Vahid Halihodzic needs to play to win against the Panthers.
It's all on a knife's edge. 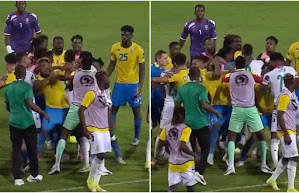 That's precisely why we got scenes like this.
Gabon vs. Morocco

Pierre-Emerick Aubameyang likely remains out after the team doctors detected an irregular heartbeat post COVID. No need to chance it. No reason to either. The team has done alright without its captain.....but that doesn't necessarily mean they have the quality to win here.
Regarding the Lions of the Atlas, bookie thinks we're looking at rests for Sofiane Boufal and Selim Amallah. That probably translates to starts for Youssef En-Nesyri and Munir El Haddadi.....and plenty of goals too.
THE LINE: Morocco +2 Goals
Ghana vs. Comoros

Do or die time for the Ayew bros and their shepherding of this country's football program. They don't have to be perfect; merely effective against a team that has really shown us nothing over the short course of this competition.
No goddamn 5-4-1 parking, Milovan! 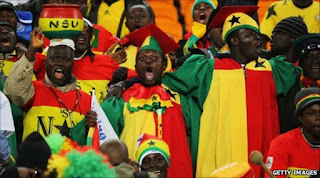 You will not let these fans down! Bookie forbids it!
THE LINE: Ghana +2 Goals
Initial Group Projection (1/5/2022)