It's continental ecstasy is it not, gentlemen?

One could have scarcely hoped for a better quarterfinal round.

What could possibly put a damper on our African reverie? 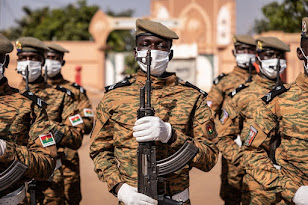 Ah shit. There's been another coup, hasn't there?

Africa lovers are actually quite accustomed to this. It happens more often than one might think during this tournament. As always, from the very beginning your friendly bookie never promised you an exclusively fairy tales.

Spare a care for the Stallions of Burkina Faso. Imagine, as they did, prevailing in a emotionally exhausting nine round penalty shootout, then waking up the next morning to learn that your family and friends might be among the endangered protesters on the streets of Ouagadougou. 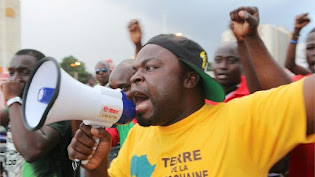 Somehow, these lads have to pull it together for another pressure-cooker of a football match. You may think it's difficult to rise each morning and put on a brave face for your job. African footballers have been through things you just wouldn't believe.

Merely to list country's playing through civil strife in the pages covered by this sports book alone over the years:

Whew. Bookie thinks that covers all of them in no particular order. Note that we've only been covering AFCON on the blog since 2013. Those are just the countries with issues in the last nine years.

...a happier photo perhaps to get us back to the football? 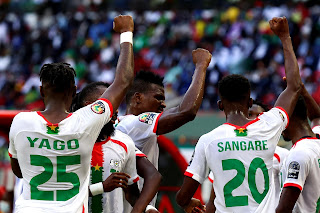 Ride on Burkinabé Stallions. We're all with you. 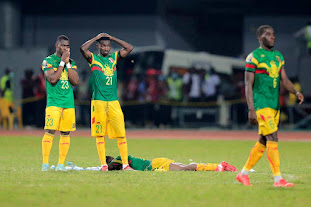 Sniff. So long "Aigles" of Mali. That was a particularly cruel way to go. 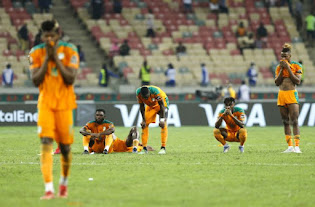 Ugh. Still reeling from Cote d'Ivoire's elimination under almost identical shootout circumstances. I don't want to get off the pitch either. About all I can do is invite Eric Bailly to come present these Lines with me. 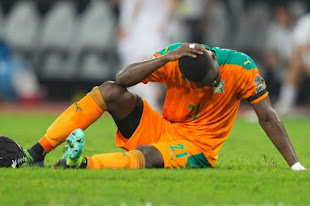 I know, brother. I know.

Somehow we must find the strength to move on.

Hard to believe that we're discussing this matchup...oh right except for the fact that your friendly bookie predicted it! You know full well that your oddsmaker knows a magical tournament dark horse when he sees it! Congrats to all of you who picked up the tip and rode the Gambian pony all the way to the bank. 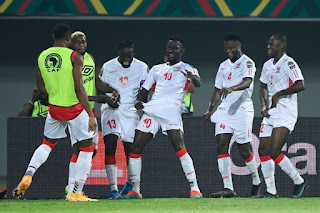 Everyone finds themselves in the grip of "Scorpions Fever".
Alas, there comes a time to wrap it up with the metaphors. Cinderella goes home. The Dark Horse gets dismounted. The Scorpion loses its sting. Have your pick. Hosts Cameroon may have played their decidedly worst match of the tournament against the Comoros.
That works to their advantage. Eric Maxim Choupo-Moting and André-Frank Zambo Anguissa won't get another start. Instead, we'll see Toni Conceiçao deploy the more reliable 4-4-2 that got us truly kick-started in this tournament.

Might be in for some hi-flying, hi-scoring fun in any case.

The Eagles of Carthage may now be known--much to the bookie's chagrin as the "Super Eagle Killers". Our initially selected tournament favorites have unequivocally finally gotten their game established. In his seventh AFCON for country, one would be ill-advised to bet against a confident Youssef Msakni. 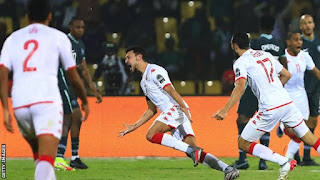 Sigh. As an unapologetic Burkinabé lover, your friendly bookie isn't liking where this is going at all. You've surely noticed that far less time has been invested in tactical analysis this time. In point of fact, all of your bookie's other writing obligations left him without much time to do any at all.

Even ramming up against the overcommitted writer's point at which words begin to lose their meaning, I couldn't resist here. I broke out the tactics board and tried to make something work for the Stallions amid the suspensions and the fatigue factor stemming from the previous fixture.

Bertrand Traoré and Hassane Bandé can still spearhead the attack. The totally depleted midfield spells certain doom. I'm throwing Dango Outtara and Kouamé Bouté back there just to plug it. Not good. Ellyes Skhiri can have a field day with this.

About the only thing the Burkinabé's have going for them is the memories of that spectacular 2-0 upset of the Tunisians at this very stage back in 2017. Everyone recall that quarterfinal gem? 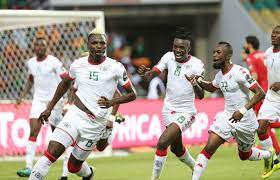 Un-effing-believeable. How about this for a Sunday wake-up-call? It's desert pandemonium in another monster match that happens to be another re-match of a 2017 Quarterfinal fixture! That particular tournament/syndicate chapter holds a very special place in the bookie's heart.

So many dramatic late victories that year. In the one we're specifically referencing here, good ol' Mahmoud Abdel "Kahraba" Moneim officially (and emotionally) brought Egyptian football back with that 88th minute 1-0 winner to defeat the Lions of the Atlas. 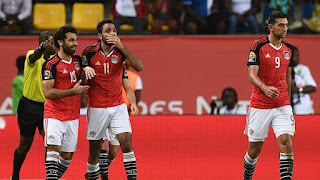 Come to think of it, Sizwe Mabena was probably the real reason the bookie loved that tournament so much. Every trip down memory lane truly begins with the South African broadcaster. Where the hell has the real star of that competition been all these years?

Anyways, we've gotten totally off tangent. Hope everyone appreciates the old picture of Mo Salah up there in the years before his breakthrough to global stardom. Here's how he looked after sinking the match-winning penalty against "Les Elephants" on Wednesday. 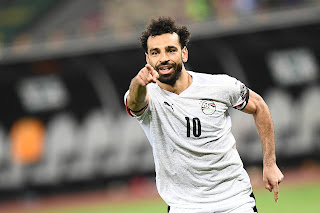 All very well and good.

Mo and the Pharaohs run into a bit of difficulty here in that the Moroccans may be the most complete team in the tournament. Carlos Queiroz is running a ramshackle bunch whilst Vahid Halihodzic lords over a well-tuned engine.

Did the bookie bloody well tell you about Achraf Hakimi or what?

You're getting a high line here.

Aliou Cissé (everyone's favorite cult trainer) may very well be the luckiest  man in the tournament thus far. Again, his Terangans played poorly. Again, they managed to dig out a victory against a side reduced to nine men by two red cards. Even then, overall play was substandard.

Oh well. At least there's some wind in the sails. 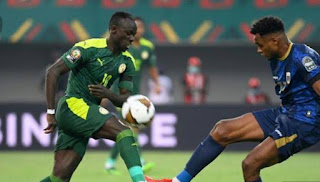 Not much wind it should take to send the underdogs home here. The National Thunder still have no reliable scoring threat. Keep your eyes open for the potential upset if the match drags on scoreless for a while.

Apart from that, the bookie has no major qualms about ending this section with a straightforward pick. Cissé can count himself lucky again to get the weakest quarterfinal contender handed to him on a platter.

The Equatoguineans could very well bow out at this stage just as badly as they did in 2015. Bookie still doesn't trust Senegal for much more than a one-goal victory.