Bookie acknowledges that we haven't gotten off to the most cracking start just yet. Plenty of cautious teams and clumsy football in a first round that averaging one goal per game directed on the nose.
Rest assured that it will get better. Everything else taking place on this spinning blue orb seems to have affected the ability of these squads to focus in camp.
One can hardly blame our African artists for some stumbles out of the gate. The close nature of many of the fixtures also mean that surprises and storylines are in the mail. Bookie has a few upset tips for you in this round.
First we'll appraise the line setting from the first round.

All those low-scoring matches drag down the spread picks. Bet against a listing oddsmaker should you so desire, but don't forget the incredible comeback during the AFC three years ago this very month. Your friendly bookie's hand can always get a bit hotter for the crossover slap.

Sadly, other writing obligations preclude us from going into everything in as as great a depth as we have in syndicate chapters past. Some more tactical analysis once we get to the knockouts, along with a mailbag feature.

The good news, of course, is that you've not long to scroll to get to the Lines. In honor of the marvelous opening round upset from our Super Eagles, we've a very special posthumous guest to welcome. 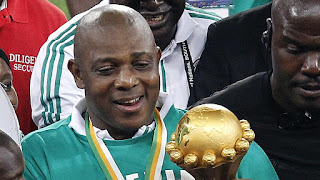 Alright this is too emotional. We're inviting Efe Ambrose and Sunday Mba over too. 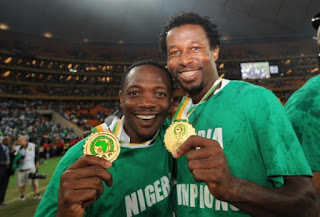 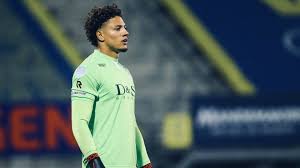 In literally the only match to feature more than one goal, Vincent Aboubakar converted twice from the spot to give Les Indomitables a clear-cut 2-1 win over the returning Burkinabés. Horrible, borderline amateurish lapses from the Stallions, who will be kicking themselves for not finishing off a multitude of chances.
Oh well. The former FC Porto and Besiktas leader striker will take it. Congratulations to current tournament goalscoring leader Vincent Aboubakar and team! He narrowly missed out on a hat trick. 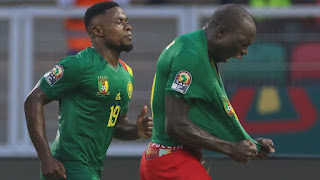 The East African Ibexes didn't do too poorly at all  in their opening match, considering they had to play Cape Verde with ten-men for 78 minutes. Looks to be a case of beginner's adrenaline coupled with a disorganized opponent.
Bookie backs the hosts for a big win here.
THE LINE: Cameroon +2 Goals
Cape Verde vs. Burkina Faso

As noted above, the Burkinabé's produced plenty of chances. Unlike some other teams in the tournament, the Stallions have some playful trickery to them. Standard Liege's Abdoul Fessa Tapsoba spearheads a pretty basic 4-2-3-1, but the ideas and rotations seem to be there.
The Blue Sharks got their three points against the group doormats in far less convincing fashion. Despite the man-advantage, "Bubista's" boys just barely won the possession battle and engineered maybe three memorable chances. The traditional West African powerhouse should bounce back here.
THE LINE: Burkina Faso +1 Goal
Friday, January 14th
Senegal vs. Guinea

Aliou Cissé's Terangans did not look good at all in their rather flukish skip past the proud warriors of Zimbabwe. They can consider themselves quite lucky for getting that last-minute penalty deep in second half injury time. Corona issues hindered what should be one of the most tenacious 4-3-3s in the tournament.
We also witnessed a surprisingly tepid debut from the National Elephants, who at times looked the worse team against heavy underdogs Malawi. In stark contrast to the projection, it looks like Kaby Diawara has the Syli in one of those obnoxious 5-3-2s that remind you of Frank de Boer's Holland.
It got the job done, but only just. Hopefully, both teams will play better in this one. We should get goals from both sides....not to mention another nice look at that Guinean goal celebration. 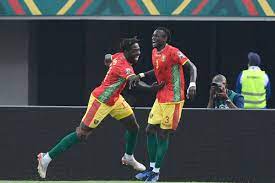 Bookie thinks we'll actually see a draw here; a fun one at that.
THE LINE: Pick em'
Malawi vs. Zimbabwe

Here's your first upset special, gentlemen. Those "Cinderella candidates" we teased have something. The Flames can spark a run. Bookie senses some proud hearts beating in unison on this team full of guys you've never hear of. They're got hair-raising potential and the hair dye to make it happen. Bring it, lads.
UPSET ALERT!
THE LINE: Malawi +1 Goal
Morocco vs. Comoros

The Coelacanths brought some heart of their own, lording over 60 percent possession and outshooting Gabon 10-4 in their 0-1 loss to the Panthers. Unfortunately for these Anglers for the sensation, Vahid Halihodzic's Atlas Lions were one of the few squads who actually looked consistently ball secure in their opening match.
The Bosnian legend has at least one team in this tournament clicking with what seems to be a well-thought-out plan. Not to say that the Ayew-centric Ghanians provided the best litmus test, but the Moroccans have a clear 4-1-4-1 system that eats the ball up. The might manage little more than another escape here as we've still got overachieving underdog spirit at work.
THE LINE: Morocco +1 goal
Gabon vs. Ghana

It obviously makes a huge difference if Pierre Emerick-Aubameyang can make it back in time for this match. Even with that X-factor outstanding, matters a'int looking too hot for the Panthers after they were shown up by a team with a prehistoric fish for a mascot.
Africa fans have grown so accustomed to being let down by the Black Stars at this point that it's almost akin to shrugging off Borussia Dortmund's annual challenge for the Meisterschale. Even by those standards, this version of the Gold Coast Playaz has us football fans wincing.
Until either one of these teams can show him more, bookie tips a draw.
THE LINE: Pick em'
Saturday, January 15th
Nigeria vs. Sudan

We're all very excited. That was an awesome emotional win over a very good Egyptian side. Several syndicate members have come down with an acute case of Super Eagle fever.....and they haven't even played in the white kits yet. 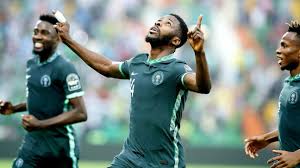 Something of a surprise from the Falcons of Jediane holding the Djurtus of Guinea-Bissau to a draw. Sigh. The one who felt himself worthy of the moniker "Pelé" missed a late penalty. Not very Pelé-like if the bookie may say so.
We'll be expecting nothing less than greatest from one of our beloveds here in this match. The opening round performance should leave plenty feeling sanguine about Nigeria's chances this year. No shortage of evidence backing that hunch, either.
THE LINE: Nigeria +1
Guinea-Bissau vs. Egypt

Ordinarily this would be the time for an "Emergency S.S.S. tactical breakdown". The bookie really isn't sure what Carlos Queiroz is thinking with his 4-3-3 that has Mo Salah central with Omar Marmoush slanted left and Mostafa Mohamed right. Meh. My projection was much better.
Querioz himself has lost a great deal of his sheen after that failed stint with the Colombian national team. Maybe I accorded him too much shine to begin with. We might be looking at an implosion candidate here based on the bookie's scout. It is such that you're about to get another "upset alert". 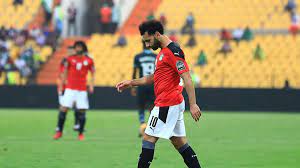 Wanna back the Pharaohs? Bookie will generously accord you the lowest possible line.
THE LINE: Pick em'
Sunday, January 16th
Cote d'Ivoire vs. Sierra Leone

We've got some excellent upstarts in the form of the Leone Stars, gentlemen. They not only held defending champions Algeria to a 0-0 draw, but actually kicked the shit out of the Fennecs in a fearlessly dominant first half of play.
One wishes there was something more brewing here. On balance, however, it looks like the group bottom feeders run smack dab into the end of the line already here. To deliver many Elephant-enthusiasts of the syndicate some good news, Patrice Beaumelle's boys look pretty sharp. 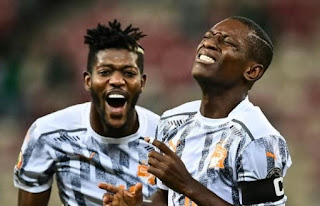 Oh yes. Max Gradel is on. Sebastian Haller is at center-forward.
This team is going deep.
THE LINE: Cote d'Ivoire +2 goals
Algeria vs. Equatorial Guinea

The desert foxes have looked worse. In point of fact, they weren't terribly good looking back in the summer of 2019 when they won it all. Teams can afford to bide their time in this tournament and it's reasonable to assume that they will bounce back.
Whether it happens just yet is debatable. The Equatoguineans had their moments in a serviceable 4-4-2, even if Cote d'Ivoire's victory never was in much doubt. The talent disparity calls for a favorite here.
The Line remains low.
THE LINE: Algeria +1 Goal
Gambia vs. Mali

How about those Scorpions? 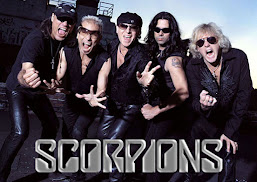 Er...no. Not those Scorpions.
We're talking about "The Gambia", who upset Maurtania on this very day. 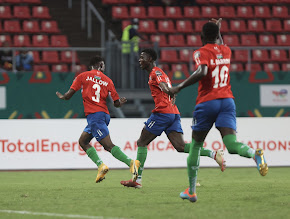 Holy shit, what a match. Such a shame that they're up against "Les Aigles" here, who proved even more impressive than your friendly bookie initially had them assessed.
The Malians look to be a great pick for a deep run this year. Start learning your Traoré's, gentlemen!
THE LINE: Mali +1 Goal
Tunisia vs. Mauritania

There was plenty of legitimate controversy as the bookie's selected favorites slipped to a shock opening defeat against the bookie's (in his heart) favorites Mali. You honestly won't believe what happened with the damn ref. Read about it if you dare.
Oh well. It looks like the Lions of Chinguetti may be the worst team in the competition. The Carthage Cats can get back to picking up points here easily.
THE LINE: Tunisia +2 Goals