Hell's to the yes! What a football match we had today, members. 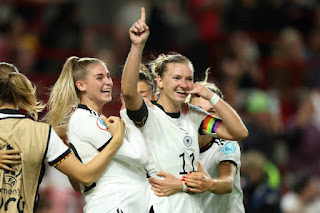 Are you paying attention, England?! Our captain has scored in four consecutive matches, setting a new European Championship record in the process. Can your skipper do that? You may think you're ready, but this bookmaker honestly doesn't think you're ready for this "jelly". 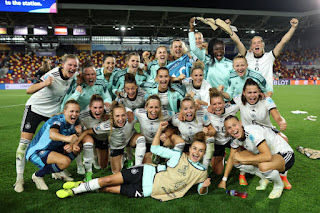 Our Mädels are back! The undisputed "Queens of Europe". How many Women's European Championships have you won? We'll, just so you know, our girls have eight crowns to your zero. Be afraid. Be very afraid. We're over there on your Isle backing them all the way.

Watch as they take a bow before a stadium full of our flags. 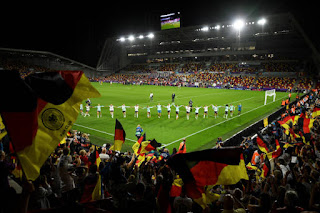 All over you in Brentford.

We'll catch you at Wembley.

Goddamn this was a glorious football match. A sincerely crafted match report from an average writer with sincere intentions comes nowhere close to doing it justice. Chances. Battles. Speed. Elegant footwork. Artful combos. With my inherent bias duly noted, I have to say it was by the best out of the whole competition.

No arguments. The best we've seen thus far.  In none of the other 25 encounters did the women's game truly showcase what it had to offer. This proved true on a tactical level as well. Two excellent trainers did a fabulous job preparing their respective set of girls for this grand "Big Sister" vs. "Little Sister" rivalry.

No surprises from the Bundestrainerin. She relied on basically the same set-up as used against Spain in the second group stage match. No need for alterations, not even when squaring off against a dueling 4-1-4-1. Put the girls on the pitch and let them battle it out.

ÖFB head-coach Irene Fuhrman went with the more ambitious version of her shape; the forward press that wasn't at all the one I was expecting. Particularly impressive from the Austrian coaching perspective (and regrettably not conveyable in this static graphic, Fuhrmann tapped four players to work the track-back. It was unreal.

Zadrazil, Dunst, and Hickelsberger-Füller all engaged in the hard work of collapsing rearward to disrupt the German build-up ploy. This deliberate ploy rattled my Mädels in the early going. Over the course of a very intense and physical opening seven minutes, we couldn't even begin to establish our game. After Huth, Gwinn, and Däbritz finally got a cycle charge going, we remained quiet until the opening goal.

When the team sheets were released, we learned that Austrian captain Victoria Schnaderbeck would be unable to partake due to knee issues. SC Sand Mädel Marina Georgieva had to deputize on short notice. Prior to Germany scoring against the run of play, your friendly bookie happens to think she was the best player on the pitch. 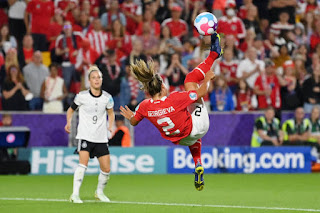 In general, great work off the ball from both teams in this one. Exquisite tackles on the many individual duels. One could effectively feel the hard prep work from the training ground in every tackle. Both coaches obviously designated "mimic" players in their scrimmage work. That's how each position player remained so courageous in taking on their opposite members.

The set-piece work was also divine. Georgieva slid right into the playbook roles obviously designed for Schnaderbeck. There was oh so much more from her than that gorgeous bicycle kick you see above. Georgieva became the first of three ÖFB actors to strike the aluminum frame in this one. It happened three times to Germany too. 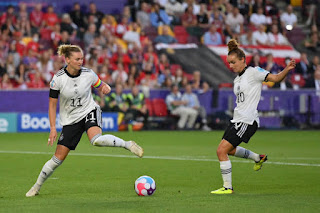 Magull's opening goal came at the end of one of the most splendid pieces of teamwork I've personally seen all year.....and I watch a helluva lot of football. Hegering began the sequence by powering an emphatic header forward up the entire pitch. Klara Bühl then viciously took the ball off Wenniger and peeled off a blistering run all the way to the touchline.

Bühl's cutback went straight in Popp's direction. How our captain possessed the wherewithal to know that Magull was crashing in behind her is beyond me. How Popp executes most of her filthy dirty tricks remains beyond my comprehension. She's simply a brilliant footballer. I've thought that since I first laid eyes on her well over a decade ago. 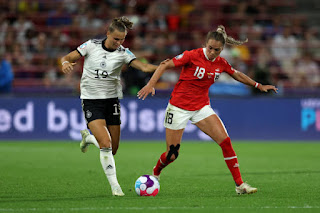 More first half badassery from the like's of Bühl (fearless taking everyone on) before it was time to go into the tunnel. Gwinn got the second 45 started off right with her own effort off the post seconds after the restart. The period of sustained Austrian pressure that followed had your friendly bookie gnawing at the stubs where his fingernails once were.

Several heart-in-mouth moments when the ÖFB girls had out net-minder Frohms beaten, only to hit the aluminum. Nothing tactical about that barrage. They weren't merely figuring out our game and disrupting it. They instead opted to emulate our game and beat us with our own fierce pressing and fancy legwork. Another prolonged spell during which Austria were the better team. 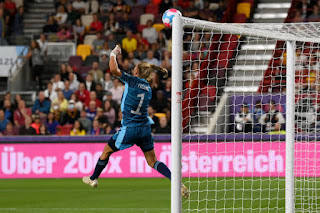 Undeniably some luck on our side during those nervy moments. No matter. The Mädels got it together and more than earned the eventual 2-0 victory. Chances from Popp, Huth, Oberdorf, and substitute Lina Dallman during the dominant final stretch meant that one could feel the second goal coming.
Bühl's dipping effort off the crossbar in the 78th. My word what an effort that was. The fact that she missed the open net six minutes later in a total spurning of a gilt-edged opportunity did absolutely noting to diminish her incredible overall performance. No question who the "player of the match" was. 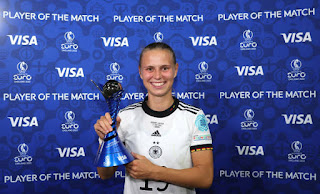 Not a complete performance from everyone. There are concerns heading into the semis. Sara Däbritz gets her second "C-Level" match of the tournament. Hegering and Hendrich proved themselves mortal after all with some of the mistakes we feared they'd make before the competition. A side with better finishing quality than the ÖFB Mädels can still punish us.

I'm probably taking it a little too easy on keeper Frohms, but in my opinion she was left with little chance on those numerous Austrian strikes. It should be noted that Gwinn and Oberdorf made numerous passing and positional errors as well. That duo were saved by their more dazzling forward play.

Däbritz hasn't been her usual, useful self. The center-halve duo can get picked clean if Oberdorf keeps turning the ball over as much as she does. At least we have zero problems on the front line. One shouldn't overlook just how good Huth was in this one. She flew in under the commentary radar, yet was excellent.

It's time to wave goodbye to a very worthy opponent. 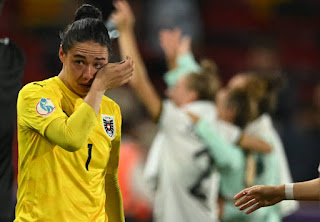 Spare a care for Manuela Zinsberger, won't you?
She played a great game prior to that late error. 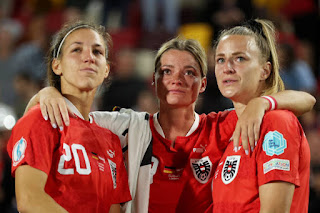 A damn good fight form the "little sisters". Nice to see so many inter-country hugs after the full time whistle. This crew truly deserved it. They undeniably rattled us and had us behaving erratically for long stretches. Can't say enough about those set-piece designs. Irene Fuhrmann truly is world class. She brought her girls into this one fully fit and ready.

Mostly decent marks for them.

Have to dock Wienroither and Wenniger for basically getting owned by Bühl all night. Naschenweng was also pretty awful off the bench. Billa, Feiersinger, and Zadrazil could have offered more in attack, but were fairly creative and lively. Zinsberger did indeed make some nice saves including basically scrubbing a ball off Popp's head late.

These are neither the marks of a winning team nor the valiant loser ones accorded to the Spaniards last night. Among the many wonderful things about this football match was that pleasing aftertaste that the better team claimed the victory. No "Conga Line" for the "Kleindeutschland Mädels" tonight. They can at least rest their weary muscles on the pitch knowing that they gave it everything they had. 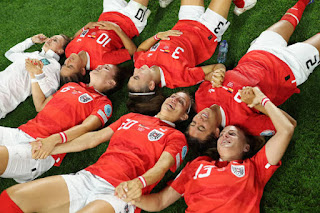 So many fantastic visuals from this team in this chapter.

“Riffs of the Day”—Day Fifteen 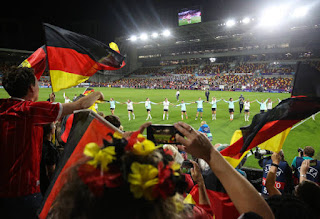 Reader: Your girl Frohms is a hottie. When did you start fielding hot keepers?

Vicey: 88-M apparently isn't a big fan of Nadine Angerer or Almuth Schult. The bookie happens to be a big fan of them both wishes to emphasize that ALL the German girls are hotties. End of discussion. There's not a fully face on this team in my opinion......which has matured significantly over the intervening years.

Reader: ....and Popp tells everyone to shut up! 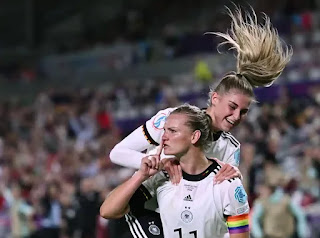 Are we getting the message, England?

Pat yourselves on the back when you beat us. 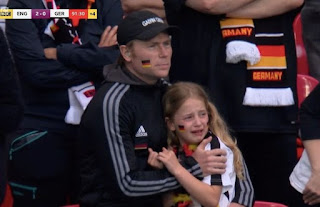 AND WE HAVEN'T FORGOTTEN THIS!!

Reader: Your girls are magical princesses with wizard wands for feet.

Vicey: Flattery will get you everywhere, 91-M. You know that. Lest anyone think that my old dear friend is merely patronizing us, I invite you to check out the legwork in this match. Amazing stuff on the ball. Go ahead and check it out and see if I'm lying. 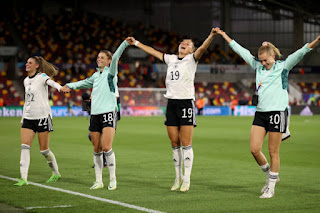 Focus on the thighs if you must. That shouldn't be too hard. You'll get treated to a most unexpected show. These Mädels play absolutely gorgeous football. We expect nothing less.

Reader: Now this match sold out, did it not?

Vicey: Yes and no, 19-M. They said so. The listed attendance at Brentford Community Stadium was 16,025. The home of the Bees can pack a little more than 1,000 into their venue. Sigh. Oh well. We'll claim a victory. Not everything can be perfect. 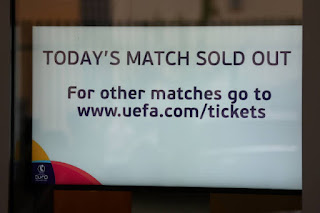 If they say so. It certainly had the feel of it. German flags everywhere as we collectively bowed our heads to commemorate Uwe Seeler's passing. 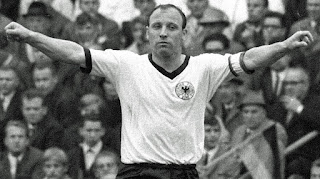 Bring some silverware home for the man who always missed out, Mädels.

Bring on the money if it tickles some sort of odd fancy, gentlemen. It all goes and flows into the bookie's final ledger. I personally think you're all nuts. Don't blame me when it ends up being a massacre.

THE LINE: Sweden +2 Goals (rolling down soft from Sweden +2)