Whew. Little hope for a more cracking start to the knockouts than that! 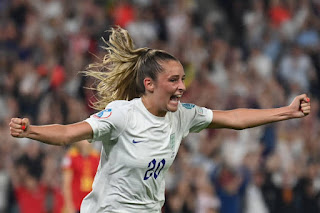 Truly something how Ella Toone remained composed enough to let that ball drop out of the air until it was ripe for the first time pluck. No uncanny ice-veined maturity from the 22-year-old phenom and we would have had no more England in the tournament. No more hostesses without Georgia Stanway's hellfire missile either. 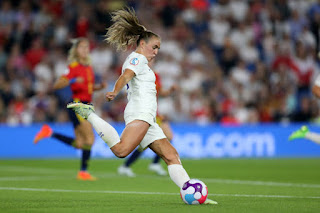 Two pieces of individual brilliance spare the blushes. We'll discuss how many other members of the team pulled together and upped their game in the nick of time below. This day must nevertheless belong to that tomahawk strike. The overall better team did not win. 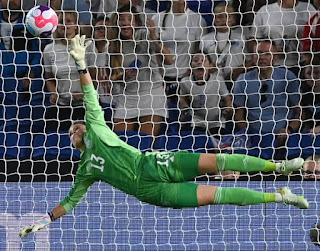 Focusing on tactics isn't exactly the easiest thing to after such an emotionally-charged encounter. That nevertheless happens to be what we do over at the Syndicate. All those tasked with writing the match report in this one surely (and sadly) had to delete the narrative that they were prepared to file after that 84th minute equalizer.
No surprises from Sarina Wiegman. She stuck with the 4-2-3-1 midfield "split-stagger" virtually all of us had cracked since the second round. Jorge Vilda most definitely had it worked out. The Spanish trainer took full advantage of the foreseeable problems with it and, as a result, had the match won on a tactical level.

Virtually everything that could have potentially gone wrong for the Wiegman's Lionesses went south in the opening 45. Fran Kirby might have gotten eight or fewer touches on the ball. Keira Walsh found herself completely overloaded on that solo axis. Stanway, the pivotal midfield link-up actor, couldn't find her way into the game at all.
Desperate play from the hostesses began well before the half-time whistle. Kirby began dropping back deep in attempt to influence the approach play. This had the result of throwing everybody off. The forward English press off the ball withered within minutes.
An ordered full flank swap between Mead and Hemp midway through the half produced nothing as both wingers were all-too-easily handled by counterparts Carmona and Batlle. Though the Spaniards didn't necessarily create serious scoring chances, Mariona Caldentey was completely hammering Bronze and Daly on both sides.
Virtually nothing from the English attack beyond that disallowed offside goal. In point of fact there was literally nothing from it. No shots on goal and maybe two legal touches inside the box. Until that promising breakaway in the 44th that forced Mapi Leon into a tactical foul on Stanway, we got zilch from the outclassed hostesses. 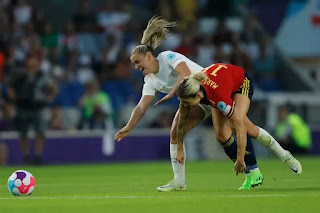 We'll give you Vilda's tactics now. They proved genuinely brilliant; perfectly calibrated to face Wiegman's stubbornly predictable stagger. Vilda surprised us by, for the first time in the competition, not lining his girls up in a 4-3-3.

Four personnel changes from last time with Esther Gonzalez, Marta Cardona, and Teresa Abelleira replacing Sheila Garcia, Lucia Garcia, and Athenea del Castillo in the attack. Additionally, as predicted, Olga Carmona took over for Leila Ouahabi at left back. The somewhat surprising Abelleira start makes sense in the context of this constellation.
With the second and third axis pulling inward and vertically chained, the fullbacks are meant to have clear lanes to work overlaps. Flank rotations among the midfield are also a great deal easier with the players keeping so close together. One of them will almost invariably break free at some point. This is how they confused and overloaded Walsh. 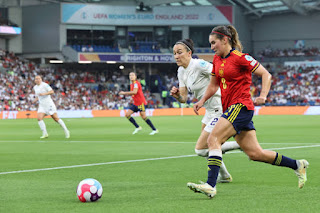 An absolutely superb first half from Caldentey, who really showed up Bronze in particular. Bonmati, Carmona, and Abelleira were fantastic as well. Vilda provided us with still more genius when he introduced del Castillo for Cardona at the break.
As everyone ideally got a chance to see, Castillo completely owned Rachel Daly on far more instances than just the 54th minute opening goal. For Chrissake she nutmegged the poor girl twice and left Lioness captain Leah Williamson screaming at her teammate to show a minimal amount of courage on her marking.
Sickly sweet skills. One assist could have easily been two or more. 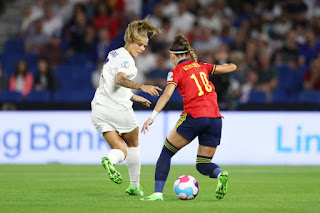 Tie the poor girl up in knots why don't you?
During the uninterrupted period of Spanish dominance that lasted well past the 80th minute, Wiegman didn't order any major changes to the shape insofar as I could tell. England's trainer basically ordered her starters and subs to collapse into a midfield choke block; a simple enough in-shape adjustment to cut off the Spanish passing triangles.
It worked to an extent. It might have worked better if the Lionesses could have done more with the balls that they won. Far too often the third or fourth pass would result in another turnover. Props to all members of Spain's back-line for giving up their bodies on full slide-blocks whenever the English did manage to penetrate the area.
It looked like Vilda had a tactical shift in mind for killing off the game. Important to note that it seemed a rational enough re-format that no one can fault for directly backfiring. Individual pieces of sheer brilliance from the less effective team on the pitch carried the day here. Vilda's new shape crystallized shortly after his third substitution.

Basically designed to give Guijarro a little bit of extra help with the subbed on Aleixandri. Bonmati hung tight in the event that anyone could be sprung on a quick counter. Hardly an ultra-defensive shell. One could conceivably critique the choice to move Caldentey central in on a suppressed nine role. Meh. Bookie finds that a tad nit-picky.
It could have and arguably should have worked. Following Stanway's goal, La Roja did their utmost to fight back in the second period of extra time. Amaiur Sarriegi made her long-awaited tournament debut shortly before the change of ends. Caldentey's replacement got a few quality efforts off.
The bookie will say it again and again and again. A few isolated instances of individual brilliance clawed this match away from the overall more sound side. We'll dole out the grades for the Lionesses now....with equal parts candor and respect. 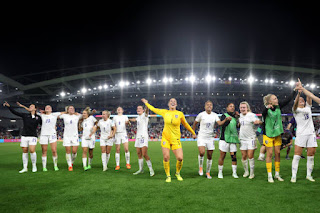 ...and all receive grades on the top level. They kiddies truly saved this match. We've only two players at the very top level. Thank goodness Stanway woke up near the end. She initiated the sequence that led to the England equalizer before supplying that magnificent hit of her own.
Walsh, Hemp, Williamson, Bronze all grew into the game to ultimately supply shockingly good performances once the comeback was on. I'd have to say that Walsh in particular did a marvelous job of remaining calm and making intelligent decisions with her distribution.
Bronze fought back to win most all of her direct duels after the 1-1. Hemp--the supplier of the assist on the 1-1--was fighting like hell in the minutes leading up to the tally. Williamson still had her issues to be frank. Maybe the bookie just appreciates defenders that (like himself) yell a lot.
Do we have a case for making changes to the starting XI? 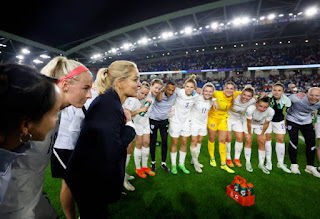 Hard to say without knowing the opponent. Greenwood, or stokes if necessary, could start over Daly at left-back. Otherwise I'd have to say no. It's too radical to yank Kirby really as she was a victim of circumstance. Lead striker White had her usual problems staying onside, but it's worth sticking with her leadership skills in a big match.
Time for the Spanish grades in our: 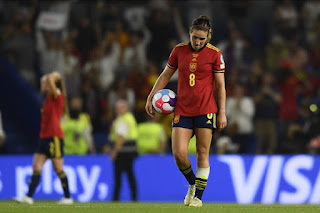 Ahem. Bookie apologizes for misspelling the Spanish form of "feminine" throughout this tournament. Moreover, I honestly thought Ona Batlle's name was spelled "Battle". Apologies for the confusion this caused, gentlemen. In my mind, it was always clear that her last name was pronounced [Bat-LEE-A]. That ones for those of you wondering where the "battle" girl was.

"Fan Boy" bookie here is learning all the time.

I obstinately refuse to mark anyone down at "C-Level", not even Paredes for losing that aerial battle to Russo late on. As much as I might want to dock Leon down for having the gall to protest that obvious tactical foul.....I'll let it pass. 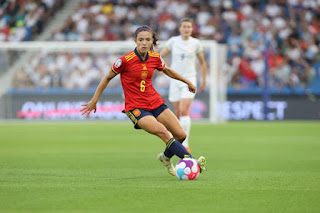 This is an absurdly good set of marks for a team that ended up losing the match. I know everyone's tired of hearing about the Jenny Hermoso and Lexi Putellas injuries, or the run that this country gave the USWNT in the FWM Round-of-16.....but it's just so damn unfair.

At a certain point, this nation's time must come.

“Riffs of the Day”—Day Fourteen

Reader: Christ that was dirty from Mapi Leon.

Vicey: Look, 16-M. We all know that you're still pissed about the whole Ingrid Syrstad Engen thing. You're still going to have to eventually let this thing go. Your Norwegian crush has a girlfriend that can and will take you out at the knees. Just move on.

....but you're not wrong about that tackle.

Reader: Am I wrong for not wanting England to win this match?

Vicey: Not at all, 38-M. A little Schadenfreude as concerns the English is always called for. That notwithstanding, this is a women's tournament. Notice that there aren't a bunch of morbidly obese shirtless cockney dudes that look like thumbs in the stands. The crowd here isn't the type of toothless, tattooed hooligans that one loves to hate.

Reader: I thought you said Sarriegi would get at least one start.

Vicey: .....I did say that, 68-M I'm also sure that Jorge Vilda possesses better tactical acumen than I. 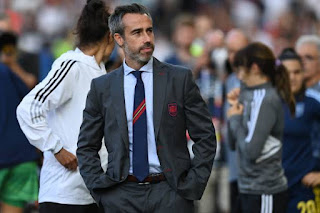 Though, believe it or not, I still think I could rock that Royal Spanish Football Association Blazer better. He's above Roberto Mancini when it comes to the blazer look, yet neither one is above me.

Reader: How in the hell does the third-string keeper get a yellow? 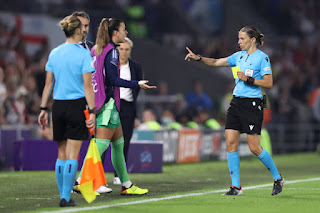 The only explanation I can offer is that the linesman radioed the insult into the match official. Can't remember something like this happening before. Honestly.

Reader: This match didn't sell out, did it?

Vicey: Nope, 19-M. Some sources claim that it did. Don't believe them. The AMEX could have packed in an additional 3,000 patrons. You'll also note that, despite the fact that the atmosphere remained pleasantly palpable, there were tons of empty seats.

Some passes were given away and went unused. I personally don't think we need to make false claims to sell this sport. Let the sport sell itself. Both sides gave it all over the course of 120 minutes. That's counts for far more than puffing up attendance figures. 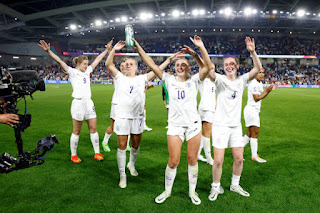 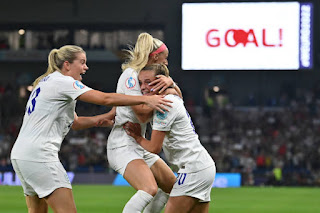 With admittedly a jumpy set of nerves after today, I'll hold the Line for the big ÖFB-DFB Mädels showdown. What the Spaniards did today shouldn't go giving my neighbors any ideas.