Now that, esteemed gentlemen, happens to be what properly qualifies as a football match. After the insufferable crap your thorough bookie and everyone else was forced to suffer through last night, boy did we ever need this to get our tournament back up and rolling. 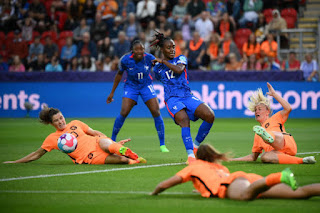 Much more like it from both teams. Fighting for every inch. Leaving it on the field. Giving up the body knowing full well what was at stake. Whereas what we received yesterday had the feel of a Sunday League game, one could feel the drama of a quarterfinal here. As it should be. 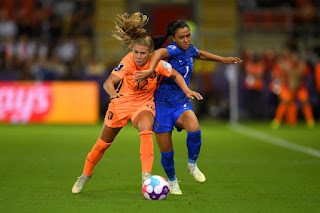 A shame there had to be a winner, honestly. 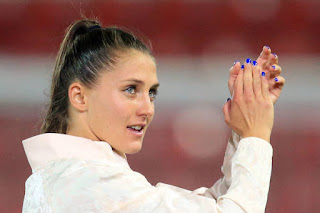 See you in the semis, ma cherie.

We'll fully cleanse our palate of last night's bitter aftertaste by going through a match that actually had a story. Your friendly bookie has seen far more intricate footballing chess matches in his time. This one was a bit more of a physical brawl. We still have some matters of interest as we again take a look at Dutch trainer Mark Parsons.

The Englishman finally got Vivianne Miedema back. He could have saved his girls a lot of time, energy, and trouble had he simply plugged his super striker into Lineth Beerensteyn's place in his previous 4-3-3. Instead, he gave into media pressure and benched Jill Roord after some mostly innocuous comments she made about his Dutch language skills.

Silly. Ego driven. Moving Daniëlle van de Donk out of the attack when she had been doing so well there served no purpose. Beerensteyn on the wing made zero sense. That girl's a central target forward. Moving Janssen back to central defense was what the bookie would have done and Casparij proved an inspired pick at left-back. At least he got that part right.

No real surprises from Corinne Diacre. I actually picked Selma Bacha to start over Sakina Karchaoui at left back. After what transpired later in the match when Bacha was subbed on, you can easily see why. This more fluid 4-3-3 dominated the more awkward Dutch 4-2-3-1 from the start. The Hollanders immediately kept turning the ball over in dangerous areas as they tried to build out of the back.

The French had full control by the quarter-of-an-hour mark. Diani wreaked all sorts of havoc on Casparij's side whenever she located a pocket of space. That left-back position really proved the biggest thorn in the defending champions' side throughout this tournament. Cascarino and Toletti worked early efforts in too ahead of the stretched back-four. 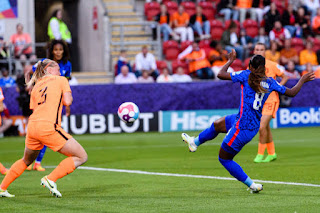 Veteran center-halve van der Gragt turned in a truly heroic defensive performance, TWICE clearing a ball off the line when her keeper was beaten. Cascarino hit the bar just short of the hour mark. Van de Donk got totally dominated in midfield. This was shaping up to be a total nightmare for Parson's girls.

One-way traffic throughout the opening 45. That naturally means nothing when the score remains tied 0-0. Parsons still needed a way to find a way for his squad to attack the opponent differently if they were to stand a chance. Sensibly enough, he basically reverted to his tactics from the last group stage match.

There we are. So much better when one gets ego out of the equation. Roord in for Beerensteyn. The Oranje were able to give the French defensive tanks some minimal work to do in the the first 15 minutes after the restart. Perhaps the French felt that they had to indeed work hard. The fact remains that Wendie Renard makes everything look easy. 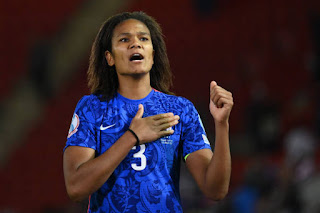 One could fairly say that the French maintained their dominance until roughly the hour mark. Roord's running of the midfield genuinely didn't improve matters much. She saw her lunch eaten on more than a few occasions. Diacre nevertheless astutely noted that the tide subtly turned in the other direction and adjusted accordingly.

Bookie very much liked this move. Switching Cascarino and putting Bacha (on for Malard) on the top axis rejuvenated Les Bleau. If you know little about the 21-year-old Lyon Lady (and the bookie counts himself among those underprivileged classes), here we definitely have a household name emerging. 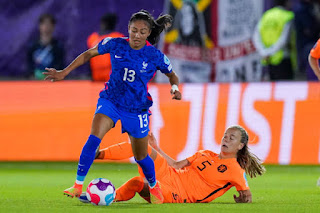 Wicked good she is. For a time while the rest of the team lagged to conserve energy, Bacha remained the lone spark-plug on the field. The Dutch grew in confidence and managed to frustrate the French somewhat. As implied in the opening sentence, there were a few dead-leg spells as the second half winded down.

Diacre's crew were still unquestionably the better team. It came as a surprise not to snatch a late winner just as the Swedes did last night. The only real reasons this one went into extra time concerned a horrible miss from Grace Geyoro and some seemingly superhuman saves from another emerging household name. 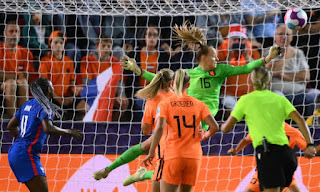 What a tournament this has been for young Daphne van Domselaar. Forced to relieve veteran Sari van Veenendaal in the opening group stage match, the 22-year-old has really stepped up for her country. Bear in mind that she only had one international cap to her name prior to this tournament. A shame she was left with no chance on that penalty. Amazing that she even got a paw to Perisset's scorcher.
Ah yes. The penalty. About as clear and obvious an contact takedown as it gets. Diani probably oversold it a little, thereby initially convincing Ivana Martincic that it needed to be waved off. VAR got it right this time and the overly better side got a deserved victory.
One more thing the bookie wanted to mention:

As pertains to the second half of extra time, don't you just absolutely love moments like this in football? The only thing that beats sending the center back up to work as an emergency striker is when the keeper strides up on that last-second set-piece. We got that one here too.

Your friendly bookie can't get enough of it. I was overjoyed to see England do it with Millie Bright in their extra time match the other night, even if I didn't have the energy left to draw it up. I did this time. One last little "Long Live Football" tactics draw up in our Final Syndicate Chapter.

Might as well get to the grades for the winners.

Plenty for your friendly bookie to be scared about as the semi-finals creep up. I'd venture to guess that Diacre will keep the front-three of Bacha, Cascarino, and Diani together. She's stumbled upon the ideal solution to the Marie Antoinette Katoto injury.

My German Mädels still have their issues in central defense. Moreover, a slight dip for midfield actors Bilbault and Toletti doesn't make me think that they're on the downtick. The two of them might prove too much for Oberdorf to handle. 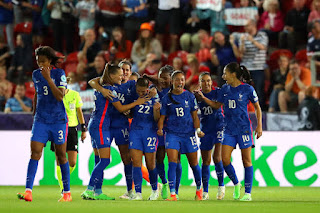 We should be in for a fast-paced game with plenty of intriguing positional battles. On spec, I still like our chances. I've seen a total dud from France in this tournament. We also have better support in the stands. Period. Factual. End of discussion. 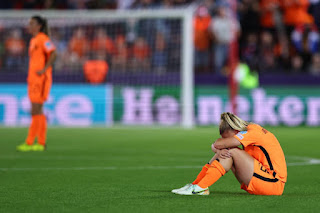 One could wonder what might have been had Miedema (looking most unfit tonight) not caught COVID or Martens not gotten hurt. Truth be told, it might have been the case that they wouldn't have done so well without the opportunity to ease in some of their next Gen players.

As the bookie stressed from the very beginning, this is a team transitioning into its next iteration. The 2017 champions will once again be a force in the women's game. I'd probably even tap them as favorites to reach the World Cup semis next Summer.

If anything, the grades tell a story.

Brugts, Pelova, and possibly even Leuchter and van Domselaar might be starting by next Summer. After he last few matches, it looks like Wilms might have been thrown in too soon. What to do with a striker-heavy side having problems at the fullback position? 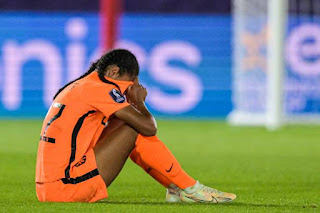 Just move those with experience on the wing back. Call the bookie crazy, but he basically has faith in the Parsons appointment. The man showed some class immediately reversing the mistake he made with Roord and generally appears to have a solid tactical acumen. We'll be hearing from this talent-laden squad again soon. 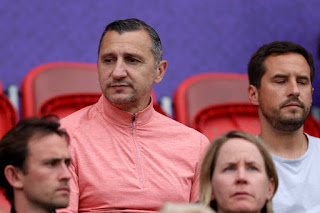 “Riffs of the Day”—Day Seventeen

Reader: Even if I bet against them, I can't help rooting for France when I hear the Marseillaise.

Vicey: Oh you're not even close to being alone on that one, 23-M. All the hate I've spewed on that country over the years and I sill sing along to their hymn every time. 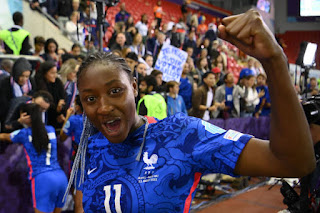 Brutal, bloody piece of shit that anthem is....but it sounds so pretty in French.

Reader: They say conditions on the pitch are both hot and wet today.

Vicey: Thanks for the forecast, 11-M. By the way, I don't recommend that you google that phrase in relation to the Women's Euros. That'll take us back a few years.

Reader: Did Parsons really just bench Jill Roord for pointing out that his Dutch wasn't so great?

Vicey: I'm on Roord's side in this dispute, 5-M. A real man knows how to take criticism regarding his linguistic deficiencies. And criticizing people who can't speak other languages remains oodles of fun. Nothing like reminding Trump voters who expressed the desire to move to another country that, had they actually been to another country, they might realize that they speak other languages there.

Reader: Miedema looks like she's completely out of it. 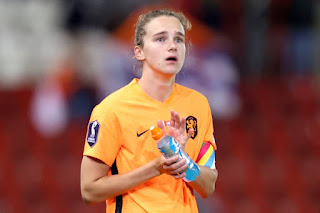 Incidentally, when will we actually stop sticking asymptomatic vaccinated and boosted professional athletes into COVID quarantine for no real reason. When will this end? Can we stop testing around the middle of the decade?

Reader: Oh Dominique, what the hell was that? 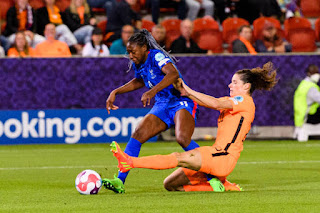 I mean...scissor tackle is just too weak a word for this. What in the hell was she trying to accomplish here? Get to the ball AFTER she hauled her down and took out both her legs? The touch can't exactly be priority #4.

Reader: Now, this one sold-out didn't it?

Vicey: Sigh. No, 19-M. Nine thousand seven hundred is still almost three thousand short of the full capacity in the New York Stadium in Rotherham. They say what they say. If it makes everyone fell better, then so be it.

Reader: When can I see the Oranje Army invade the streets again.

Vicey: The World Cup is only a little over three months away, 33-M. 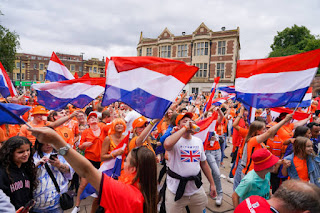 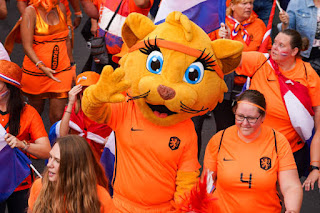 The Leuwinnen mascot will have to wait until next Summer, however.

She bids you a unique Oranje farewell until the next round of Lines!