A tournament generally isn't considered a success without an eminently memorable semi-final round. Entering the semi-final showdowns, those of us who consider ourselves advocates are admittedly a little nervous about everything remaining on the proper level.

In a way, we have no real reason to be. Thus far the competition, with the notable exception of a couple lemon fixtures, has been a smashing success. We're still averaging just over three goals per match. The general atmosphere has remained on par with that of a competition of this magnitude despite some of the low capacity numbers we've been covering in the dailies.

Of course, many more will be paying attention now and all of us involved in lending this tourney coverage desperately hope that the girls can capture some more hearts and minds. As always, if you've found yourself a mite busy during the most recent round, your friendly bookie is pleased to supply you direct hyperlinks to the latest batch of dailies.

Show em what you've got, lasses! If we're honest, we women's footballing enthusiasts truly want that England-Germany Final at Wembley as well. In the spirit of this wish, the bookie shall invite probably the most consistently impressive England player over the course of the competition to present these Lines with him. 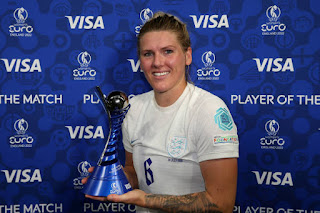 Get the job done, Millie. My Mädels will certainly do so. We'll keep the green kits in reserve for our meeting on Sunday. The world deserves the two best teams on that sacred pitch.

If one simply wishes to go on recent form here, we've a no-contest. Those fortunate enough to witness England's pulsating comeback victory over Spain in the quarterfinal round will certainly fancy the Lionesses to sally forth with their thundering momentum. Those fortunate enough to miss out on Sweden's piss poor eke-out win over a genuinely horrible Belgian side can be glad that they missed out on one of the worst international tournament matches ever.

The task of getting the Swedes back up to their undeniable potential falls to trainer Peter Gerhardsson, who has much work to do on both the tactical and foundational level. The head-coach who has switched formations more so than any other gaffer in this competition must perhaps first focus on the reality that his girls basically forgot how to play basic football. Bookie can't emphasize it enough. They were awful. 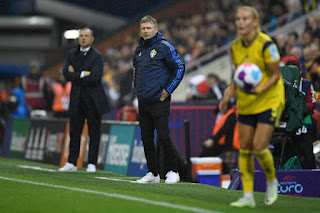 Bookie has actually been keeping tabs on Gerhardsson's public statements and pressers. The man literally cannot stop using the word "plan". He's uttered it maybe 2,398 times. Sometimes he speaks of an "extreme plan" or a "radical plan". Oh boy. The man who began this tourney with a back-three, then made all manner of personnel changes in a loose 4-2-3-1 prepares something nigh on impossible to predict.

To make matters less foreseeable, none of us handicappers have straightforward information coming out of the Sweden camp with respect to the recent COVID cases. The Scandinavians have opted to take a furtive approach when it comes to the availability updates. Bookie has no clue whether fullbacks Hanna Glas and Jonna Andersson, absent from the previous encounter, will be available for this one.

Bookie had some real creative building to do below. When it comes to the potential changes England trainer Sarina Wiegman might be making to her XI, it's probably safe to assume that it's nothing more than hot air. People need something to discuss and debate at this stage of a tournament. Hence, there's puff pieces about Alessia Russo potentially starting in place of Ellen White or maybe Greenwood coming in while Williamson moves into midfield. 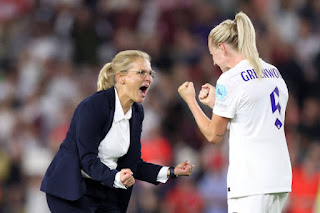 Bookie isn't flinging it. I don't even think that she'll bench Rachel Daly after that noticeable second half dip against the Spaniards. To tinker with her system whilst the Blaugults sit in such a disarray would be foolish. Her girls remain well drilled in the execution of the 4-2-3-1 "split stagger". Provided the offensive actors locate their finishing touch early, the Lionesses stand a decent chance of putting it out of reach before Gerhardsson's girls get organized.

The English girls thus line up in the exact same fashion as last round. Bookie takes Gerhardsson at his word and proceeds to go hog wild with the Swedish formation below. Wholesale changes in the attack see Olivia Schough and Hanna Bennison introduced into the starting XI. The primary idea behind my build (logically enough) is to make the most of Kosovare Asllani's blistering tournament form and use the captain as a direct service striker.

It gives the Swedes a fighting chance...on a purely hypothetical level. Your friendly bookie still thinks that, even assuming that Gerhardsson gets his tactics right, it will take too long for the team to establish a rhythm. Any way one theoretically slices it, we've something of a mismatch. The pre-selected tournament favorites go crashing out and the hostesses earn a multi-goal victory.

Well. Win or lose, bookie remains satisfied. Our Mädels made the semis and that's all that truly counts. As much as I'd love to see our girls take back the European crown that they once held for a monumentally impressive two-decade-long span, I wouldn't be overtly disappointed if they played a respectable game against a evenly-matched opponent and came out on the losing end. 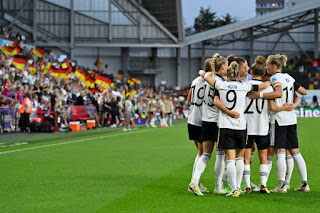 Perhaps I'm not nervous because I sincerely doubt that it will happen. Having had some time to ruminate on the potential dangers the French pose based on the last match, I'm just not worried. We line up against them really well. We can take the "Gauloises Gals" out clinically enough. Wendie Renard shall make life difficult enough for our surging attacking trio. There's still three of them and one of her.

Much has been made of the recent form of Alexandra Popp and Klara Bühl. That duo absolutely deserves every last bit of the hype. Your friendly bookie wishes to point out that--to his eyes, of course--Svenja Huth has turned in a quietly phenomenal tournament. You're not hearing much about her because she's been off the scoresheet. 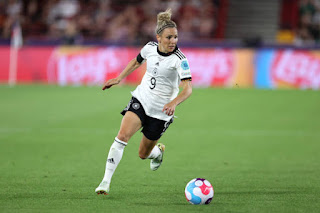 I tap our semi-secret-weapon to have a gem of a day running roughshod around that French left. As concerned as I am by some of the recent risk taking of our fullback Giulia Gwinn, something about the manner in which the pair have been interacting together recently tells me they could both be in for a monster match. Their rightward slant midfielder, Sara Däbritz, is overdue for a big game too.

None of this is to suggest that the French should be taken lightly. Er. As a matter of fact, scratch that. I'm taking the French lightly and I don't care who knows it. Not one, but rather two flatter displays from them in this tournament. Renard, whom you're welcome to know is the competitions leading shot-taker, still hasn't found the back of the net. It's just not her year.

Two days extra rest for my girls and the fact that Diacre's crew are coming off a grueling 120-minute match further convinces me that we can handle them. They're obviously likely to maintain crazy pace in those slightly more tired legs. Doesn't matter. They don't play the type of beautifully fluid football that we're capable of. 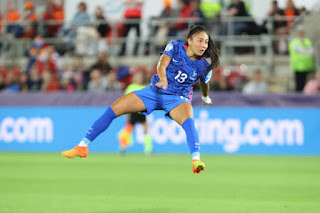 I'm putting the spritely Selma Bacha in the French starting XI by the way. If Corinne Diacre doesn't do so, then the FFF should really think about finally having the right reason to let her go. Watch the bookie build a better lineup than the notorious draconian She-Wolf. Read as I chastise her for it later in the daily.

Bit by bit, German football gets back on track. Our girls exact revenge for the men's defeat in the 2016 Euro semi-finals. Then we're off to Wembley to take out the English, thereby exacting our revenge for the defeat in last Summer's round-of-16. We're coming back. Beware.