Phew. Bookie was indeed a bit nervous there for a little while towards the end. No sense in denying that. Thankfully, my country has what can only be described as a "goddess". I don't throw that term around lightly either. The absolute last daily in the entire history of the syndicate fittingly features a "goddess": leading the way. 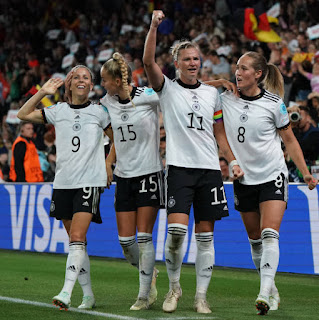 Alex, you truly are divine. England fans are more than welcome to swoon over Beth Mead all you like. Our skipper is currently tied with her in the race for the Golden Boot. She's scored in all five matches. Today, she carried our team by conjuring up two goals out of thin air. 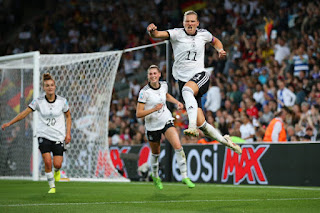 Up into the stratosphere the legend goes. Does England really think they can best us when we have this magician on our side? Sunday at Wembley can't get here soon enough. 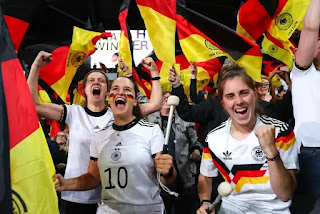 Oh we'll be there, alright. 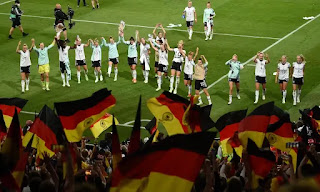 So too will they.

A full-match report penned by the bookie is already up to those who committed the horrible sin of missing this fixture. We'll talk a little nuance here. Surprisingly enough, there did exist some in Milton Keynes today.

I can show you some interesting things Corinne Diacre tried to do and throw up our lineup one last time. Naturally, you know the inherent weaknesses at this point. It essentially comes down to our best XI.

This...isn't exactly it. News that influential attacker Klara Bühl--the undisputed player-of-the-match last time out--would have to miss out with COVID threw 19-year-old Jule Brand into the mix. Bundestrainerin Voss-Tecklenburg appeared to compensate by switching Huth's basic slant, as well as flipping Däbritz and Magull. I'm more convinced of the latter than the former.

The kid did okay, though she had difficulty handling the front-three rotations. Defensive track-back work proved a little bit of a challenge for her because the basic spatial arrangements appeared to turn this 4-1-4-1 into a borderline 4-3-3. This could have been in anticipation of Dicacre trying to mimic the 4-1-4-1, which I happen to think she did.

Thanks to this, much of the first-half proved a virtual stalemate. I'll even accord Les Bleaus a slight advantage in the midfield duels. Toletti and Geyoro were winning plenty more 50-50s. Bilbault held her own from a semi-sweeper spot and definitely proved equal to Oberdorf.

An opening 45 primarily characterized by lots of foul stoppages (some more questionable than others) finally shook out of it's slumber when the girl I was warning you about--two assists for Svenja Huth today--got in her first useful cross for Popp in the 40th. 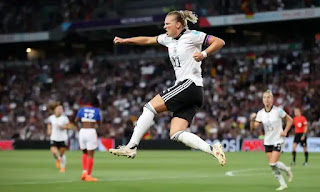 Christ what a finish that was. You can't fault Perisset for the marking. You truly can't. Hendrich's marking on Diani during the equalizer less than five minutes later, on the other hand, could have been much better. Regarding the 1-1, I guess the Gods of the Goalframe thought we deserved some divine retribution after the Austria match.

All well and good. Based on the ebb-and-flow of the match (what there was of it anyway), I happened to think that a tied score heading into the tunnel was squarely fair. Diacre made the same second half adjustment as she did against the Dutch last time ahead of the restart.

Bookie must concede that Bacha was once again brilliant. That little sprite had me scared more than once. That's why I advocated starting her. Diacre probably made the right move first trying to mirror the German formation, then switching over to her more tried and tested approach. In all honesty, it worked. 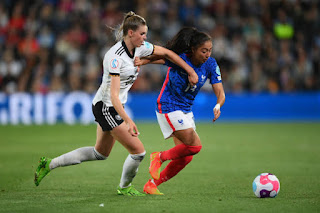 Not exactly a "chess match" affair considering that Voss-Tecklenburg didn't really make any adjustments. Diacre unquestionably made the right moves. Even after Popp's second goal, the French trainer had a great idea for pulling another one back.

This kept me nervous until the very end:

We really struggled to kill this game off. The diamond box out of the back was absolutely murdering us. Some desperate defending from all ten of our outfielders, not to mention some really brave keeping from Merle Frohms, preserved the scoreline. 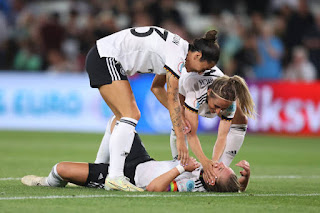 No wonder poor "Poppi" immediately hit the deck after the full-time whistle. Her track-back defending on this night was also top-notch....and she was still running full-tilt at 90+3 trying to orchestrate a counter. Full of heart. Let me go ahead and repeat the word "goddess". Why, oh, why to so many chose to ignore this fabulous sport?

Popp's performance simply cannot be emphasized enough. We'd be nowhere near the Final without her. How hard was that headed finish on the game-winning goal? Why, she only had to beat both Wendie Renard and Kadidiatou Diani while threaded THE ABSOLUTE PERFECT NEEDLE. 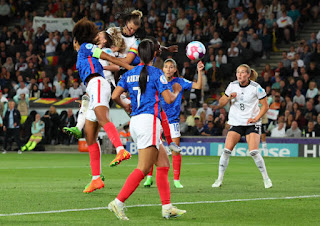 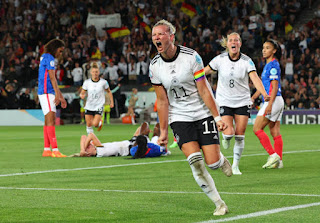 Er....where were we? Oh right. The rest of the team. My complete faith in Svenja Huth paid off. Again, two assists for the team's second best player. Hopefully Bühl will be back for the final. If not, after Brand's performance, it might be time to consider Schüller or Waßmuth.

Yes, the defense will have to do better. Hendrich and Hegering had their problems and Rauch dipped. What in the hell is going on with Däbritz this tourney is beyond me. She's still far too skilled a player to even begin to consider benching. 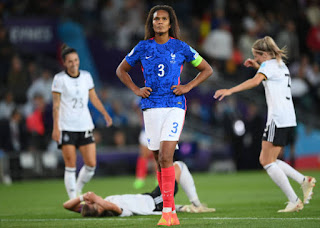 Poor Wendie Renard never did get her goal this tournament, did she? The competition's leading shot-taker found herself robbed here once again. Another wonderful performance for her today in this historic tournament for her team. They'll be back with a vengeance next Summer.....assuming that Diacre's notorious moodiness still enables her to make the right selection.

By and large, the bookie liked what he saw. This is what happens when a game is decided by an insanely perfect performer such as Popp. So many moments could have swung this one differently. For instance, Diani had Geyoro wide open on a cutback in the 67th when she opted to shoot herself. That's just one example off the top of my head. 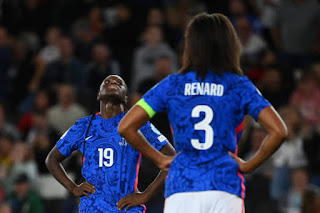 This one truly was razor-thin. A tough one to take for a talented team that tried so hard. Oh well. As  the great Thierry Henry once put it, the losing side is just the side on which the unlucky sometimes are forced to sit.

“Riffs of the Day”—Day Nineteen

Reader: I do believe that Merle Frohms just took it in the Hans Jörg Butt.

Reader: What, what in the Frohms?

Vicey: Single Zing for 53-M there.

Reader: That ball just did to Merle Frohms what I'd like to.....

Vicey: HUSH, 45-M. I'm cutting you off there! We don't do that anymore....though I have to admit that own-goal was probably one of the best moments in Syndicate history. 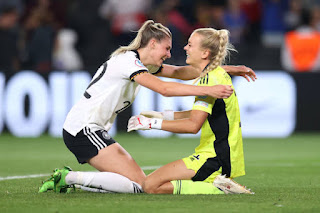 Reader: Jule Brand is staring at me.

Vicey: No she's not, 54-M. Don't go being a dirty old man. And didn't I warn you about this three years ago when we were discussing Giulia Gwinn? You really must be careful in these tournaments. Don't let those long spider-legs fool you. She's only 19! 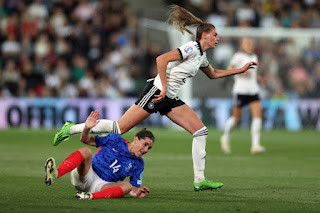 I will nevertheless admit that those are some freaskishly long legs. Who sired this child? A freaking tree? Perhaps one of those wacky waving inflatable arm flailing plastic sky dancers.

Reader: Do you, like Alexandra Popp, sing the German national anthem with your eyes closed in a meditative trance? 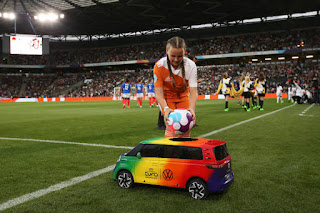 According to my late mother, it was the first word I ever uttered.

Reader: You Krauts helped make this a true sellout.

Vicey: Not quite, 19-M. Some three thousand more could have been packed into the MK Stadium. I will, however, take this opportunity to pimp how my country supports women's football one last time. 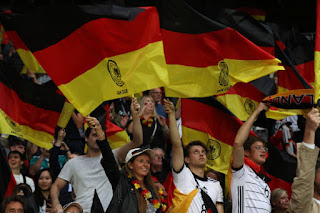 They (and I) bid you a very teutonic farewell until the final, FINAL GOODBYES.